Our OUS SW France association has made a regular habit of chateau visits, characteristically to chateaux in vineyards. Such was our visit on 9th May to the British-owned Chateau Bauduc, notable as a supplier to top chefs such as Gordon Ramsay, Rick Stein and (for those who know North Wales well) Bryan Webb, in whose restaurant members first encountered Bauduc.

It was not the best day for sunning ourselves amongst the vines, but we did note the black vines first planted in 1947 and the netting being tested to protect against the hail which often destroys substantial percentages of the annual production. The chai contains two sections for red and white, generating a substantial volume of production that seemed immense to your correspondant. Shipping to bottling requires an exercise of military precision.

The Chateau has its own website which tells the story of the Quinney’s successful venture and it was Angela who very kindly greeted us in their chateau-home for an extensive degustation of Crémant de Bordeaux, whites and reds. 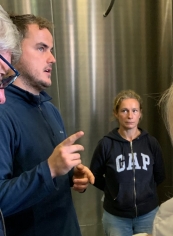 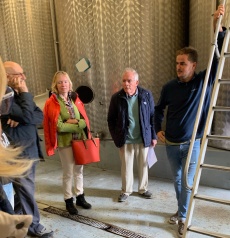 Sensible planning by Nigel ensured that we were not late for lunch at la Table in Créon where we enjoyed an excellent menu around a single large table, as the photos display (other photos can be found at OUS Bauduc ).

2019 marks a new step forward.  Sainte-Mère Festival has supported over 50 talented young musicians and one of the most promising new quartet ensembles in Europe. This year we are also supporting an exceptional young composer. The Festival has been fortunate enough to join the famous Aldeburgh Festival of England and The Philips  Collection of Washington, in a co-commission of a new piece for string quartet by Freya Waley-Cohen.  The European premiere forms part of this year’s exciting summer programme. The details are now on the website.
With best wishes,
Piers
www.saintemerefestival.net 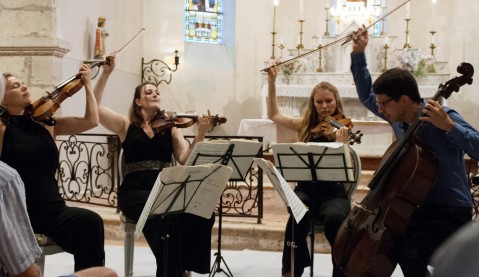 The restaurant Le Caillou near Vire-sur-Lot was this year’s venue for our AGM. Discussion centred on the substantial continuing interest among members and the forward programme for 2019. An agreeable lunch followed for the 13 members attending and 12 partners and friends: apologies were received from a further 17 members. Our thanks to Greg Hawes and Nigel Griffin for their organisation.

On 9th August 2018, some 21 members, family and friends met for lunch in the Auberge des Bouviers in Lectoure for a lunch of quality in its splendid upstairs room. A couple of us courageously (or foolishly) tried the menu du jour’s very substantial andouillette but everyone else stayed in less challenging but much appreciated territory. As ever on these occasions, amidst good conversation, some new friendships and encounters were generated in the true spirit of our association.

Our objective then was to meet member Piers Killeen at his Chateau to see the then-resident Albion Quartet practice a piece from their next concert. The weather being (for this summer) atypically uncertain, we found them already at work in the Church next door. However, we were all quickly ejected by the onset of an imminent funeral and so repaired inside Piers’ fine house to hear them rehearse Ravel’s Quartet in F. We were much intrigued by the dynamics of the interplay between the players as well as the stunning immediacy and quality of their playing. Given that they had three concerts in three days ahead to rehearse, we were very privileged to get this unusual insight into the creation of fine music and to be able to ask questions about their approach to their work. Piers remarked that their concert the previous evening had been an exciting demonstration of the evolution of the quartet form from Haydn’s signature Op 20 no 2 to Beethoven’s final quartet, Op. 135 – followed by a well-timed thunderstorm.

Piers also provided tea and gave us an intriguing tour of his Edward I-period chateau (in which the concerts are held). He explained the historic and bureaucratic challenges that restoring such a monument present – historic because so little is known about its origins and the method of construction must mainly be deduced from what is there.

We would very much encourage those of you with an interest in chamber music to join Piers’ membership and attend his concerts as a result: http://saintemerefestival.net/en/.

Our great thanks to the Albions and to Piers for making it all possible. 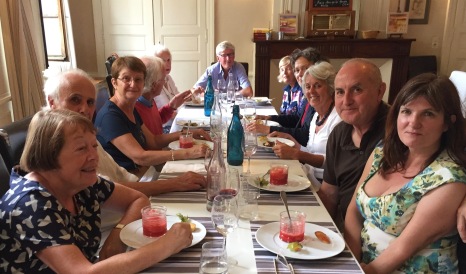 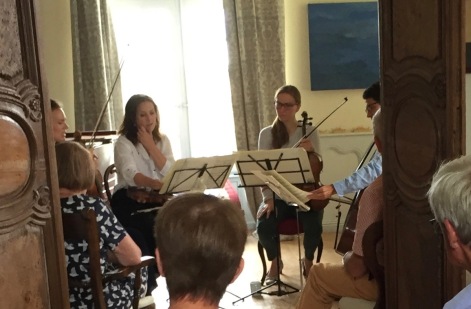 Nigel Griffin writes: A small group of Members was warmly welcomed by Geoff and Penny Douglas to a picnic lunch in early June on the terrace of their home near Rieux-Volvestre (Haute-Garonne), the Ville-cité where in 1982 Le retour de Martin Guerre was filmed. They kindly arranged a late morning visit to a local atelier with stunning views of the Pyrenees, where the potter Sylvian Meschia spoke of recent installation work featuring his ceramics. After lunch, we were taken by a neighbour, Jean-Pierre Soulat, on an enjoyable and informative tour of the village he knows so intimately. 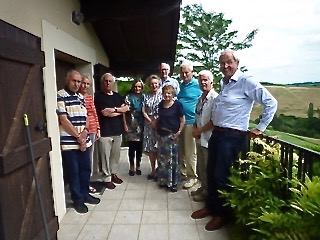 This visit to the Cité du Vin and the former German submarine base was somewhat undersubscribed (Royal Wedding, Whitsuntide?), but this of us who were able to come had a splendidly sunny day in Bordeaux to enjoy both attractions.

‘Attraction’ might be a misnomer for the massive concrete wartime submarine pens constructed with forced labour organised by the Organisation Todt. Our passionate guides told how the massive pens (12 metres deep) were constructed and how they were defended from American aerial bombardment. Whilst the surrounding Bacalan area had been destroyed by misguided bombs and the retreating Germans had destroyed as much as they could, Bordeaux was ultimately helped in its restoration by a courageous German francophile who prevented the detonation of the last bridge across the Gironde.

Sadly, we have to report that impending commercial exploitation may rub out some of the history as the pens are converted into more modern attractions, but for those interested in quite recent history the visit is inexpensive and is currently supplemented by a digital art exhibition in the cavernous underground of what had been the tower block next to the pens.

Prior to this visit we spent the morning in the Cité du Vin with lunch in the Brasserie. Your correspondent enjoyed the Bacchanalian art and music exhibition, the view from the Belvedere and the array of wines from just about every wine producing country. Lunch in the Brasserie was memorable mainly for good company.

Our thanks as ever to Marion for organising this most enjoyable day out.

We  are sad to have to announce the recent death of Jeremy James, founder of the OUS SW France Branch, and former chairman.

Son of a mining engineer, William Jeremy Layard James was born in what was then Southern Rhodesia, and spent his early years in South Africa. After attending Blundell’s School, he went up to Oriel in 1958 to read Greats.

A short spell with IBM was followed by an administrative career in several of the colleges forming part of London University.  On retirement, he and his wife Sara moved to the village of Dondas in Lot-et-Garonne.  They both became active participants in village life, as in that of the local British community.  His love of music led him, over the years, to acquire an extraordinary quantity of recordings and documents related to his favourite conductor, Carlo Maria Giulini, but his Oxford associates will remember him also as a keen connoisseur of organs and organ music. To some of us he confided his pride in his Huguenot ancestry and his glee whenever he found traces of it in local archives.

In 2007, and after what must have required a lot of ground work, he wrote to a large number of Oxford graduates living in south-west France, proposing that we could set up a branch of the Oxford University Society, as it was then known. On a chilly day in October, several of us met him and Sara in Moissac, where he presented his project in detail. His enthusiasm, dedication and obvious determination to overcome obstacles,  convinced any of us who had doubts about its viability that an OUS branch in south-west France was indeed possible. It soon took off with around 70 members.

He remained chairman until 2010, but continued to take an active part in the life of the branch, arranging lunches in the Lot-et-Garonne, and maintaining links with the OUBC which have enabled us for the past three years to enjoy meeting the crews during their winter training sessions in Le Temple-sur-Lot. Organizing this event gave him particular pleasure; sadly, illness caused him to miss the most recent one at the beginning of January.

He took the fortunes of the branch very much to heart, and he would certainly wish it to continue in the tradition of friendship and conviviality which he inspired from the start.

Donations may be made in his memory to « Cancer Support France Lot-et-Garonne » by cheque made payable to:

The Society* was inaugurated in 2007 at the instigation of Jeremy James (Oriel) and has members in most of the departments of South West France. Membership is open to anyone with a connection with the University whether resident in France permanently, with a holiday home or just visiting. We aim to have a number of activities throughout the year ranging from vineyard tours (obviously), visits to places of interest, an annual lunch or dinner and other social events. The aim of the Society is to provide a convivial environment in which people with a common interest can meet socially. Members are drawn from a wide age group and of course from many and varied occupations. We welcome any input and look forward to hearing from you with new ideas or suggestions as to how the Society can develop. Just post your thoughts or comment on an existing post: see the help page for details on how to do this. A list of members names and departments can be sent on request. * Société de l’Université d’Oxford Association Sud Ouest de La France 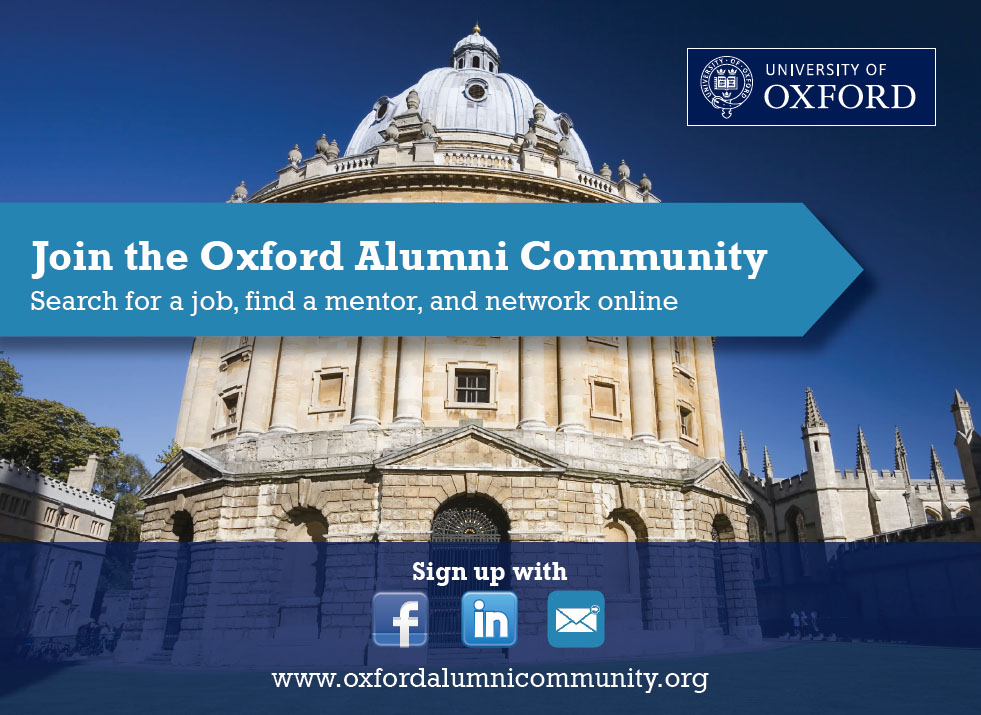